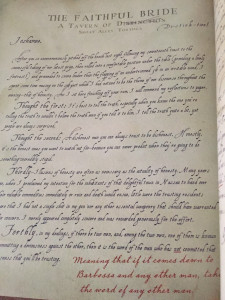 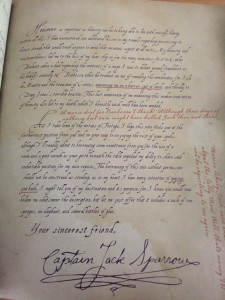 After you unceremoniously pitched off the bench last night following my seventeenth toast to the successful taking of our latest prize, then rolled into a comfortable position under the table (providing a lovely footrest!) and proceeded to snore louder than the flapping of an undertrimmed jib in an irritable wind, I spent some time musing on the subject which I had noticed to be the theme of our discourse throughout the evening – that of honesty. As I sit here finishing off your rum, I will commend my reflections to paper.

Thought the first: It’s best to tell the truth, especially when you know the one you’re telling the truth to wouldn’t believe the truth even if you told it to him. I tell the truth quite a lot, yet people are always surprised.

Thought the second: A dishonest man you can always trust to be dishonest. Honestly, it’s the honest ones you want to watch out for – because you can never predict when they’re going to do something incredibly stupid.

Thirdly – Illusions of honesty are often as necessary as the actuality of honesty. Many years ago, when I proclaimed my intentions for the inhabitants of that delightful town in Nassau to hand over their valuable commodities immediately or ruin and death would ensue, little were the trusting residents aware that I had not a single shot in my gun nor any other essential weaponry that should have warranted their concern. I merely appeared completely sincere and was rewarded generously for the effort.

Forthly, in my dealings, if there be two men, and, among the two men, one of them is known for committing a deviousness against the other, then it is the word of the man who has not committed the deviousness that you’ll be trusting. ( Gibbs leaves a note on the page here: Meaning that if it comes down to Barbossa and any other man, take the word of any other man ).

However, as important as honesty can be to being able to live with oneself, having written all of this, I have encountered one additional lesson in my travels regarding possessing an honest streak that would teach anyone to avoid that veracious aspect at all costs. My honesty and trustworthiness led me to the loss of my dear ship on far too many occasions – first to Cutler Beckett when a deal regarding the contents of a cargo I was to deliver proved fraudulent on his behalf; secondly to Barbossa when he tricked me out of revealing the coordinates for Isla de Muerta and the treasure of Cortes, marooning me on a barren spit of land; and thirdly, to Davy Jones’s terrible beastie. This last occurrence of me evidencing this cumbersome virtue of honesty also led to my death, which I honestly wish could have been avoided. ( Gibbs’ footnote: A worse deal for Barbossa I think! Although three days of nothing but rum might have killed Jack then and there! )

As I take leave of the virtues of Tortuga, I hope this note finds you at the farthermost position from jail and on your way to enjoying the rest of your spoils, although I’l readily admit to borrowing some remittance from you for the use of a room and a good wench as your girth beneath the table impeded my ability to share said undertable position for my own repose. The borrowing of this coin without permission should not be construed as stealing, as in my heart I have every intention of paying you back. I might tell you of my destination and its purpose, for I know you would now believe me whatsoever the description, but let me just offer that it includes a cask of sea sponges, an elephant, and several bottles of glue. ( Gibbs footnote: Morein likely Jack said that to Anamaria about the Jolly Mon! Well, that’s not money I’ll not be expecting to see again )